So it has speed.

The 3.8-litre engine from the 650S is now a 4.0-litre twin-turbocharged V8, hosting many mechanical and electronic wizardry components and produces 710bhp and 568lb ft of torque.

So it has raw power.

On the inside and outside, it comes equipped with many updated features, carbon-ceramic brakes, an 8.0in infotainment system with sat-Nav and the new folding driver’s display. If you want more, because you simply can and who wouldn’t, then you can opt for Luxury and Performance models, which each will set you back £218,000, and you get electric and heated seats (luxury) and carbon-fibre for the air intakes and door mirrors (Performance).

However, if that wasn’t enough, now you can excite your inner child with the New Track pack which delivers even lighter, more circuit-focused supercar. So what does the additional £28,000 worth of track pack gives you? The weight of your precious road legal 720S, is reduced by 24kg, with hood air intakes, rear fender air intakes and door mirror casings all invaded in carbon fibre and, the engine bay gets ambient lighting. 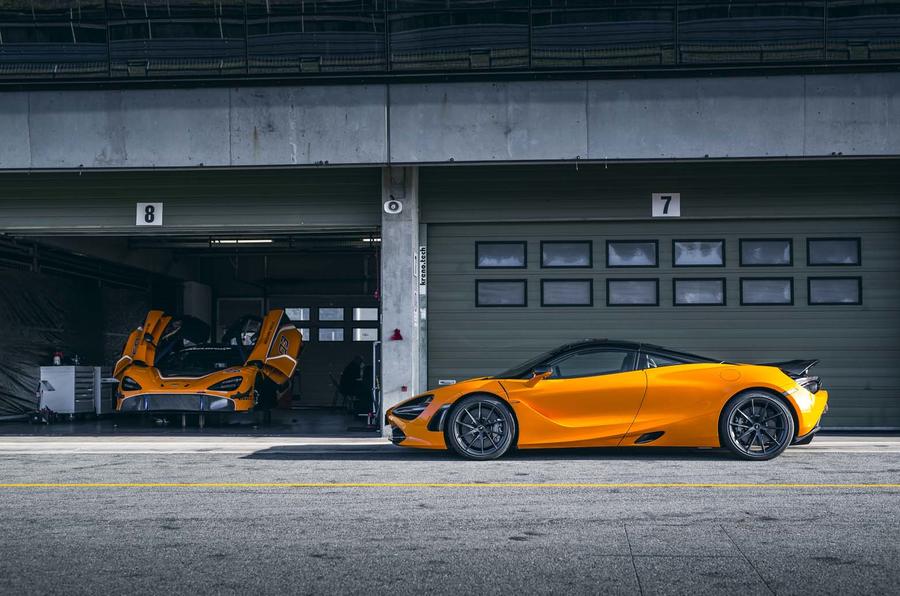 Image 1 of 8
On the exterior, you are greeted by Super-Lightweight 10-Spoke Forged Alloy Wheels, an MSO Defined Gloss Finish Visual Carbon Fibre Active Rear Spoiler and a Sports Exhaust. On the inside, there are few refinements, Lightweight Carbon Fibre Racing Seats and a titanium bar mounted behind the seats supports 6-point harnesses for both driver and passenger.
McLaren’s acclaimed 720ps twin-turbocharged 4.0-litre V8 engine delivers acceleration from standstill to 200km/h (124mph) in just 7.8 seconds, with Proactive Chassis Control II active suspension and carbon-ceramic disc brakes optimising dynamic performance and braking. Owners can analyse their track driving using another element of the Track Pack, namely the McLaren Track Telemetry (MTT) system. Using three video cameras built into the car, MTT will further enable the driver to monitor their performance and understand where opportunities to improve lie. A range of real-time data is displayed – such as lap times, sector splits and driver comparisons – as well as video footage to spot missed apexes and premature or delayed braking points.
The Track Pack as mentioned previously adds £28,360 to the price of a McLaren 720S, The 720S Coupe in Performance specification with Track Pack is available to order from McLaren Automotive retailers for 2019 delivery, priced from £224,700, and the McLaren 720S GT3 is confirmed at £440,000 with deliveries also beginning in early 2019 .